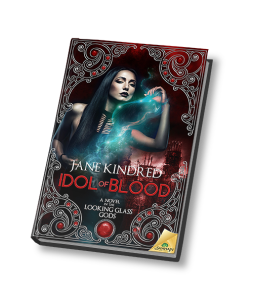 The price of revenge may be her sanity…and the lives of those she loves.

No longer haunted by memories of her life—and death—as the Meer of Rhyman, Ra looks forward to a quiet existence with her lover Jak in the Haethfalt highlands.

Having made peace with Ahr, her consort from her former life, Ra can finally explore her new relationship, free of the ghosts of the past—until she unwittingly unearths Jak’s own.

Out of instinct, she uses her Meeric power to heal the pain of Jak’s childhood trauma.

But all magic has a price, and Ra’s bill has come due.

Succumbing to the affliction inherent in her race, Ra flees to the mountain ruins where her mother’s temple once stood. As the madness takes hold, she resurrects the ancient city of AhlZel in a tremendous act of magic that seals her fate—and threatens to destroy those who would give up everything to save her from herself.

Since the light was beginning to lower, they set up camp, only a dozen leagues from the green riverbanks of Rhyman. Jak and Geffn lay on either side of Ra, a peculiar triad of necessity, and Geffn, fatigued, was asleep almost instantly.

Ra curled away from him toward Jak beneath her blanket, eyes seeming to glint like a cat’s, though nothing else was visible in the darkness. “We haven’t really had a moment alone since…” The soft murmur trailed off. Jak knew precisely what moment Ra meant. Before they’d left Rhyman; before Ra had disappeared in the night to rescue little Pearl—a Meerchild bred in captivity and kept in a cage by the prelate of In’La; before Ra had set fire to the temple there, and the prelate with it, Jak had thrown caution to the wind and climbed into bed with a goddess. The commitment to celibacy Jak had tried to maintain since before Ra’s arrival in Haethfalt had been tossed aside like a cheap shirt.

After returning to Rhyman with Pearl, Ra had made no further overtures toward Jak, and Jak hadn’t presumed to make any toward Ra.

“It’s all right. We don’t need to—” The weak protest died on Jak’s lips as Ra’s descended on them. Her kisses had a tendency to take one’s breath away, as if she gathered it all into herself, holding it, holding time, before giving it back.

When she finally let them both breathe, Ra slid beneath the blanket and rested her head on Jak’s breast. “I could deepen Geffn’s sleep.”

Jak considered it for a rash moment before squelching the thought. “No. That wouldn’t be fair to him.” That was an understatement. Screwing one’s new lover while asleep next to the jilted lover whose heart one had recently broken would be in bad form, to say the least. And it would add more to that invisible price Ra must be paying if she were to expend magical energy when she had so little physical energy to spare. “We’ll have time enough when we get home.”

“Home.” Ra snuggled closer. “That sounds very nice. I’ve never had a home before. Just a temple.” She said the word as if it meant “jail”. While she spoke, however, her hand moved down Jak’s arm with feathery strokes, dipped over Jak’s hip and across Jak’s belly, and played at the loose drawstring waistband, fingers just inside it.

Jak placed a hand over Ra’s, meaning to stop her, but Ra entwined their fingers and slid them lower. As if it were an act of self-pleasuring, Ra used Jak’s fingers to delve deeper and press against the supple flesh, tentative, leisurely motions encouraging Jak to show her how to proceed.

“When we return to Mound RemPetaJakGeffnMelKeirenRa—” She murmured the absurdly long name of their Haethfalt household as if they were only having a quiet conversation—“I’d like to make a quilt by hand.” She drew Jak’s fingers in a complex pattern, up and down, over and across, doubling back in infinity symbols that ended in sharp, insistent points, like the edges of rings bisecting each other. “Do you like this pattern?”

Jak shivered and breathed ascent as Ra pressed Jak’s fingers into the center point of the bisection. Her motions became smaller, tighter and more definitive.

“Some little rosettes where the squares join,” Ra whispered. “One. Two. Three. Four…” She demonstrated. “With a diamond in the center. Right…there.”

Jak had to grab the blanket and bite down on it to keep the sweet little crooning howl Ra had inspired from escaping audibly.

Jak struggled not to thrash, rationing sharp rhythmic breaths into the fabric of the blanket.

“And then just there.”

In the grip of a wave of pleasure so intense it was almost unbearable, Jak clutched Ra’s hand so she could no longer effect her blissful torment, the other hand digging into the bedroll as pantomimed moans were buried in the crook of an elbow.

“Perhaps in peacock blue with threads of gold,” Ra continued as if she hadn’t just destroyed Jak utterly, her other hand casually stroking once more up Jak’s arm. “The colors of Ludtaht Ra. Though it may be time for new colors. I’ve always liked indigo.” She nestled against the hollow of Jak’s neck, putting a little kiss there before relaxing with a sigh to match Jak’s heaving breath. “Does that work for you?”

It took a moment to remember how to swallow and speak. “Work for me?” Jak let out a nervous, whispered laugh. “Just about killed me. I’m crazy about it.”

Jane Kindred is the author of epic fantasy series The House of Arkhangel’sk, Demons of Elysium, and Looking Glass 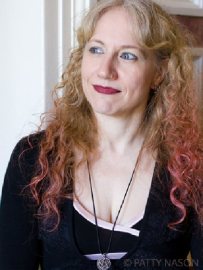 Gods. She spent her formative years ruining her eyes reading romance novels in the Tucson sun and watching Star Trek marathons in the dark. She now writes to the sound of San Francisco foghorns while two cats slowly but surely edge her off the side of the bed. 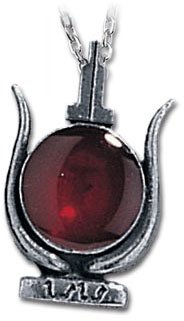